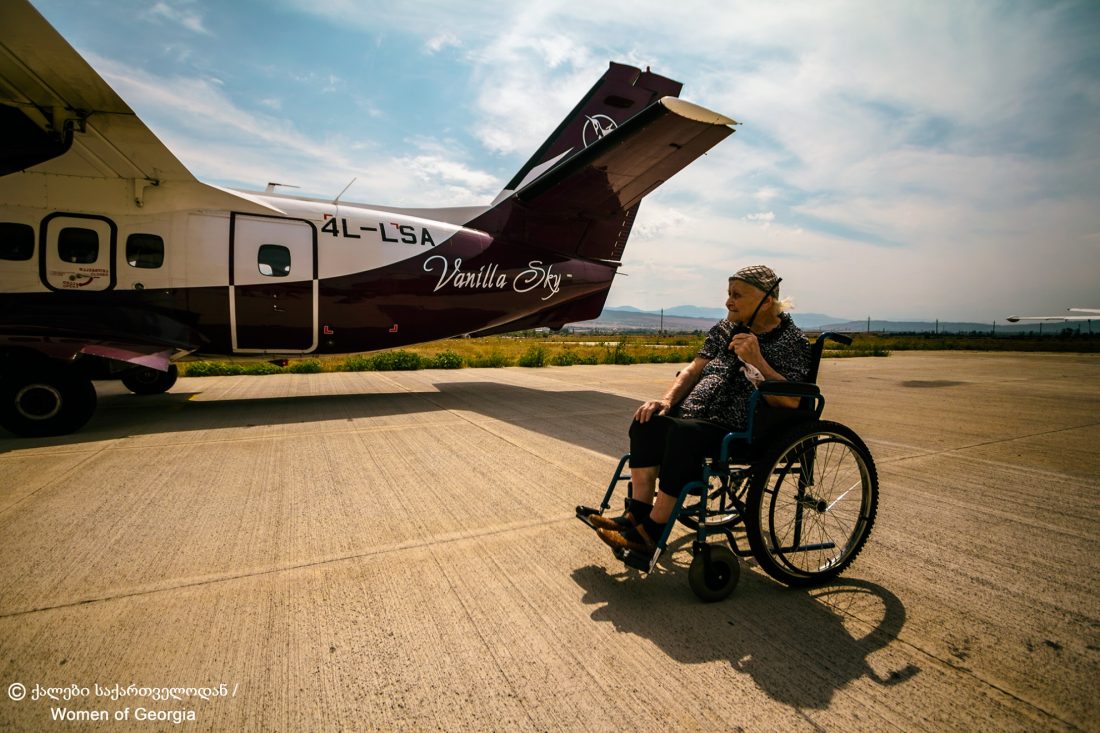 When I was a child, we lived in Gori. I remember when I heard the jet noise – I used to go out immediately, hoping to see an airplane in the sky. You should have seen me back then, how happy I was, seeing one of them. I was thinking all the time will I fly one day as well? I didn’t tell anyone about my dream, I was scared that my dream would never come true.

Once, girls at school were talking about what they wanted to do with their lives in the future. Some were going to be doctors, some of them were going to be teachers… One of my classmates approached and asked me – why are you so silent Veriko, what do you want to become in your life? And I answered – A pilot, – it was the first time I dared to speak out loud. I can remember the girl’s eyes, as if they were not even surprised, looking over too seriously. I thought I said that – if I won’t be able to fly, it will be such a shame, right?! But I decided to do it. I convinced myself that I could.

When I sat on the plane for the very first time, I hadn’t even finished school. I was studying in the air club. By the way, many girls were studying the aircraft. I am often asked why I chose the aviation, why I was interested in airplanes since it’s an unusual job for a woman. But yes, I was interested, I was wondering what you’d feel like looking down from a high altitude, especially when you’re doing that by yourself.

I remember the first time I flew. I was alone. To take off is difficult, but it is even more difficult to land the plane. When I dropped the plane, I saw that instructors didn’t come to help me. In general, there was a rule – when the student would put the plane on the ground, instructors were coming so that they could help get off and avoid damaging anything. Suddenly they called: “Лети, Вера” (“Fly, Vera”) and manually pointed to the second circle. I was so good at it, that they made me fly all over again several times, even though it was my first lesson. I can still hear – Лети, Лети (Fly, Fly)… 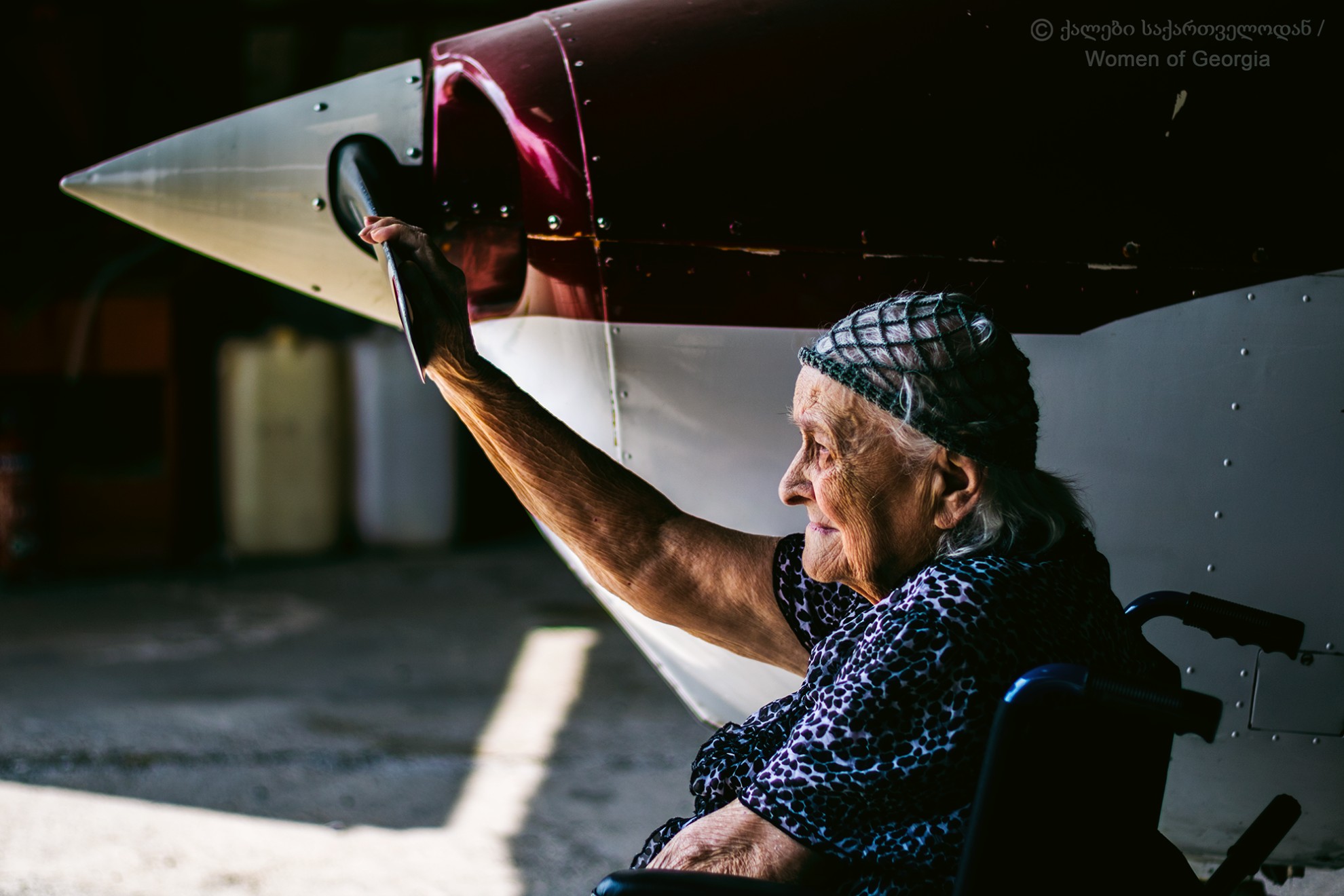 I was able to make circles around with an aircraft. There is one maneuver called “Strip’’. The airplane is going to land until you reach the ground and as soon as you do that, you should change the direction and gradually correct it. I especially liked this “sneezing”.

Once we had a parachute lesson. The training was like this – we would stand on the wing of the airplane, to learn how to hold the balance and then return to the booth again. When I walked on the wings, suddenly I put my hands up and walked. Instructors were so scared that they didn’t allow me to do that for the second time.

When the war began, they took us, air club students to Azerbaijan and taught us how to find the difference with engine sounds between our aircraft and the enemies. If you listened, you would know exactly what type of aircraft was flying at what rate and what height. During the war, the boys who were studying aviation were sent to the front line. The girls were faced with this case – we had to listen hard for the enemy planes, and sent the information to Gori intelligence, so we could save cities from them. “Heinkel 111” and “Junker 188” were flying in front of us. My intelligence was always accurate. I had a very keen ear for pitch. Once I realized that there were two enemy aircraft flying instead of one. Nobody else noticed!

I remembered my father. I was in the first grade when I was writing something and suddenly I said loudly – I will become a pilot. My father stopped and looked at me. Did he tell me anything? No, I did not ask either what he thought. He was just silently staring at me. He might have thought that how could such a weak girl like me, who was ill all the time, become a pilot, but he did not bother me. Then sometime later he said to me, you would accomplish what you would set out to do.

I was already studying aviation when I heard my father and his friends talk. They asked him, you always wanted to be a part of aviation, why did you change your mind? It was for the first time I heard my father wanted to fly. I didn’t, – responded my father, – but they didn’t take me because of my low vision. You see my father’s dream come true.

My father did not get it but I did. And my father was happy that her daughter was a pilot. 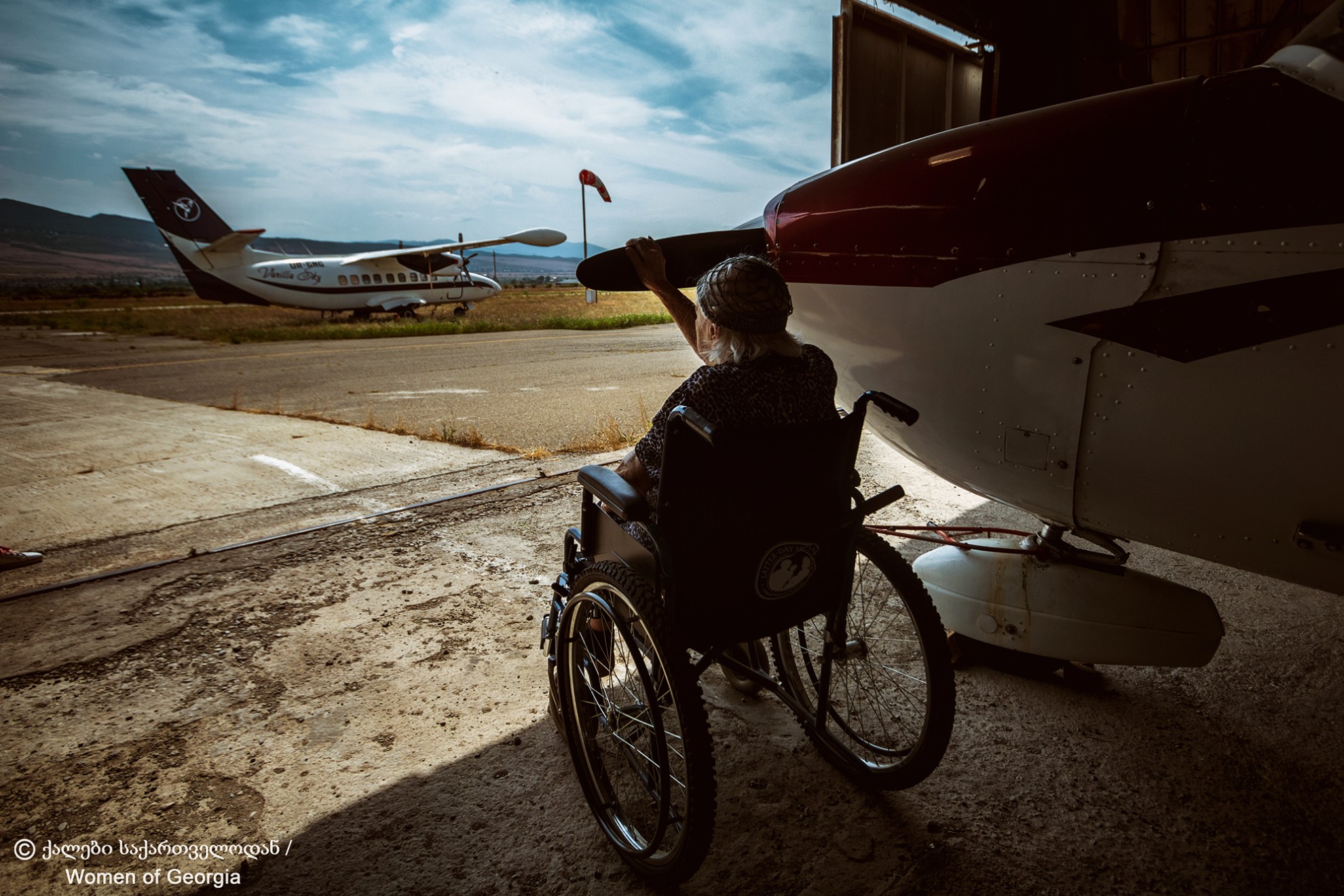 No one thought that I could live that long. I was a very sick child. Often, I was in the hospital for months. I was released from the war front line because of illness. I missed to fly but they did not allow me to do that again. Can you imagine, I have not seen a plane for 75 years! There was a magazine and I have seen photos of my friends of war. I was not in the picture. Not me. I was heartbroken because I was with them at that time and everyone forgot me because of my illness.

I would get back to the time, I would not leave the aviation. I already knew that I would have live to 96 years and sickness could not change it.

Did I ever fall in love with someone? No. never. I do not know if anybody fell in love with me. The aircraft sound was my everyday love. For years, I have been standing and listening to them. It was my love.

I have retained good hearing ability right now too, but I can’t see anything. As soon I close my eyes, I see my pretty airplanes right away. ‘’

Special thanks: Natakhtari Aerodrome, Airline “Service Air” team and Mariam Morchiladze to introduce us to the respondent.

The author’s note: We had promised Grandma Vera that we would take her to the aerodrome to take some pictures. She exceptionally prepared for it. 75 years later she had to meet the first plane – was not easy at all. Because of her blindness, we were telling her everything we saw from the car, the way we were driving and the things we saw. At the Natakhtari airdrome, there was a team of ”Service Air” waiting for us. Grandma Vera was taken to meet pilots. She told them her story one more time. Can I touch the plane? – She asked. One of the pilots brought her near the plane, touched her hand and hailed, ”Лети, Верa” (“Fly, Vera”).